Our people make Spring Valley Academy special. We are blessed with talented, caring, compassionate individuals in our administration, faculty, and staff. From the best classroom instruction possible to focusing on the importance of Christ’s influence in academic and beyond, the SVA staff is intent on delivering the best education possible to our students. 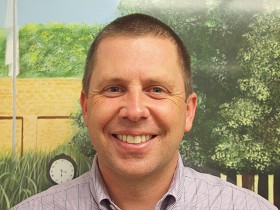 Darren Wilkins has spent 14 years of his life at Mt. Ellis Academy as a student and administrator and 25 years in SDA education service which now includes 5 years at Spring Valley Academy. He passed a happy childhood in Havre, Montana, attending the SDA elementary school there and dreaming one day becoming an MEA Eagle. That day did come. As an MEA student Darren studied just hard enough to maintain a 3.0 GPA while spending as much time as possible in the gym and on the MEA ski hill. In three years of high school at Mt. Ellis, he had only a handful of unpleasant visits to the principal’s office. After graduation from Mt. Ellis, Mr. Wilkins headed off to Pacific Union College and then to the Adventist University at Collonges-sous-Saleve in France. He considers his year studying in France as pivotal to everything that came after. He became fluent in a second language, discovered a passion for history, and most importantly, met the love of his life, Yvette. Upon returning from France Mr. Wilkins completed his undergraduate studies at Walla Walla University, graduating with a BA in French and Minors in History and Math.

In short order after graduating from Walla Walla University, Mr. Wilkins married the beautiful Yvette and began his career teaching Jr. High math and history at Loma Linda Academy in California. In 8 happy years at Loma Linda he served as Jr. High Vice-Principal and eventually moved to the high school level. In 2001 he was invited to return to Mt. Ellis Academy where he was instrumental in redefining the image of MEA by establishing a variety of programs during his 11 years there.

Mr. Wilkins has completed his Masters Degree in Curriculum and Instruction as well as his State High School Principal Certification. His greatest source of pride however is in his three sons: Monte, Torvy, and Kobe. He also enjoys outdoor adventure learning, languages, hiking/backpacking, kayaking, skiing, reading history, world religions, and service travel. Darren shares, “We have been so blessed in joining the Spring Valley Academy family and happy to call this home!”

Colleen G. Hardy has served as the Business Manager for Spring Valley Academy since 2014.  She has over 22 years of experience working in Accounting and Finance in an academic institution at the University level.  Colleen began her service at her Alma mater Caribbean Union College (Trinidad), currently known as the University of Southern Caribbean.  She worked in the Business Office as a student worker for three years and after graduating was hired as a Junior Accountant.  Between 1990 and 2012 she worked as Accountant, Chief Accountant at the College Press, Senior Accountant, Financial Controller and Vice President for Financial Administration.  Prior to joining the team at Spring Valley Academy she lived and worked for two years in Houston, Texas as a Tax Professional.

She was born in Georgetown, Guyana and is a citizen of Trinidad and Tobago where she lived most of her life.  She has a Bachelor of Business Administration degree in Accounting from Caribbean Union College (Trinidad) and an MBA in Finance from Andrews University (Michigan).