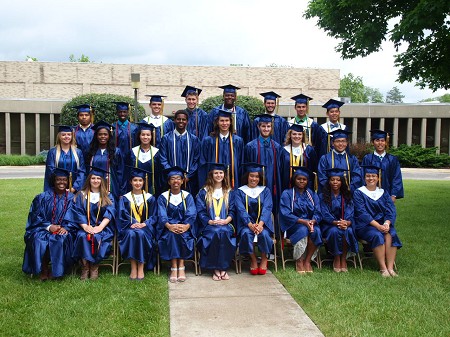 Spring Valley Academy held their 46th Annual Graduation Exercises commencing with their Consecration Program on June 29 held at the Centerville SDA Church. Mr. Ben Moushon delivered the Consecration address afterwhich seniors presented their family tributes. The next morning the Baccalaureate was held at the Kettering SDA Church at 11:45 am with the Baccalaureate address given by Pastor Elliot Smith, Associate Pastor of the Kettering SDA Church. That evening the seniors’ class night festivities began at 9:15 pm in the gym featuring the various talents of select seniors and the Class of 2015 slide show. On Sunday, May 31, twenty six seniors marched (before approximately 600 family and friends in attendance) for their graduation held in the gymnasium as Dr. Ron Halvorsen, Jr., Ohio Conference President, delivered the Commencement address.

Highlights of The Class of 2015 included the following: